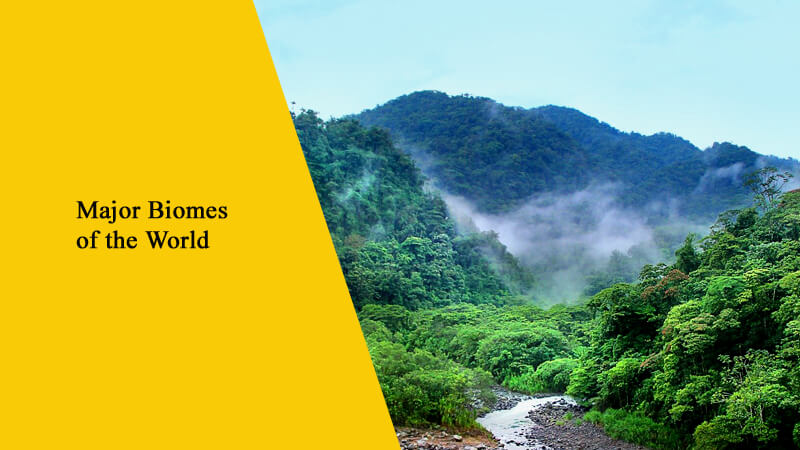 Are you looking for the information about the biomes?

Then your searches ended here because this article will help to find out the major biomes of the world.

The biome is a plant and animal community that exists in a specific environment. It is a group of the ecosystem that incorporates a variety of habitats. In 1916, this term was recommended by an American plant ecologist for the first time.

Biomes are also defined as fundamental units of the biosphere. There are two major groups of biomes: Terrestrial biomes and Aquatic biomes. Mainly, the biome is categorized based on major three factors: humidity, elevation, and latitude

Terrestrial is a major group of biomes that is based on land. There are so many types of terrestrial biomes. They are:

The tropical rainforest or tropical wet forest covers the greatest biodiversity in the world. It locates near Earth’s equator. This biome is also described as ‘the world’s largest pharmacy’ because it contains large species of medicinal plants.

The tropical rainforest is commonly found in South Asia, America, New Guinea, and Africa.  It offers the largest evergreen trees having broad leaves and buttress roots. Their height ranges up to 45 m high. The temperature of this biome ranges from 20 degrees Celsius to 34 degrees Celsius. It receives an annual rainfall of 125 to 300 cm. That’s why Tropical rain forests never face dry seasons.

This biome is mostly covered by large tree species where epiphytes like lichens, orchids, and mosses are also grown. The broad leaves and branches of trees form a canopy that shelters large numbers of small plant species, animals, fungi, and other organisms. So, a small percentage of sunlight reaches the forest floor. Major flora and fauna of tropical rainforest are:

The emergent layer is the top outermost layer of the rain forest. In this layer, the height of trees can reach up to 60 meters tall. Harpy eagle lives in this layer.

The canopy layer situates just below the emergent layer. In this layer, a roof is formed by broad leaves and branches of the largest evergreen trees where a small amount of sunlight penetrates to reach the forest floor. So many insects including beetles and butterflies live within this layer. Similarly, lichens, orchids, and other epiphytes grow here.

This layer lies between the canopy layer and forest floor where the plant gets the least sunlight. So, shade-tolerant plants grow in this layer. Philodendron and Heliconia are dominant plant species and pythons, tiger, and gorillas are common animals live in this layer.

In this layer, plant leaves and fruits fall and decay quickly due to the high moisture level and presence of decomposers. Because of high rainfall, organic materials are washed away from the forest floor, so it has nutrient-poor soil. Low sunlight penetration occurs here.

The tropical seasonal forest locates in some parts of Africa, Asia, and America. It offers a wet season during summer with an annual rainfall of 98 inches and a dry season during winter.

The tropical seasonal forest is a semi-deciduous type, so half of the trees lose their leaves. Same as tropical rainforest, the plants contain brightly colored large flowers and soft light seeds. These seeds can easily spread by wind. But soil used to be acidic and less-fertile. Flora and fauna of this biome are:

Tropical grassland and savannas is another major biome of the world which is located in Asia, Africa, South America, and northern parts of Australia. It characterizes by grassland with scattered trees.

This biome receives an annual rainfall of about 35-59 inches during the wet season. But in the dry season, it gets very little rain resulting in a long-term drought. Some common flora and fauna of this biome are:

It receives an annual rainfall of about 55 inches. The temperature of this region ranges from 12 degrees Celsius to 27 degrees Celsius. In this biome, the trees having broad and flats leaves form a canopy layer and it covers 95% of the forest floor. So, an especially shade-tolerant plant can survive under this layer.

Temperate deciduous forest is mainly found in mid-latitude areas of the world (in some parts of Canada, China, Japan, and Korea). Normally, the temperature of this biome ranges from -30 degrees Celsius to 30 degrees Celsius and receives an average annual rainfall of 30 to 60 inches.

It faces four seasons i.e. spring, summer, autumn, and winter. Because of extreme cold few animals migrate in the winter, and plants go dormant. Major flora and fauna of this biome are:

Temperate woodland and shrubland are the major terrestrial biomes of the world which distributes over North America, California, Australia, and Mexico. This biome offers a hot climate during summer and cold in winter. Every year, this biome gets low precipitation (about 200 to 1000 mm).

Shrubs and herbs with fragrant, oily, and leathery leaves are the dominant vegetation of this biome. Most of these plants can survive in dry climates or drought because they preserve moisture on their waxy leaves. They have also the ability to adapt to nutrient-poor soil and periodic fire.

Temperate woodland and shrubland are home to large numbers of plants, animals, butterflies, birds, and other insects. Some of these species are:

Temperate grassland is a type of terrestrial biome that contains grasses as the dominant vegetation. It is mainly found in Australia, South Africa, America, New Zealand, and Argentina. The temperature of this biome ranges from -40 degrees Celsius to 38 degrees Celsius. It receives an annual rainfall of 20-35 inches. It also offers fertile soil.

Temperate grassland offers grassy plains that are home to large numbers of animals. These grasses have deep, massive root systems and have drought-tolerant capacities. Very few species of tree including oaks and cottonwood grow in this biome. Other flora and fauna are:

The largest desert in the world is the Sahara desert which locates on the Africa continent. Other hot deserts lie in South America, Australia, and Ethiopia. Similarly, major cold deserts are located in Antarctica and Greenland.

In the desert biome, very few species of plants and animals live because of the extremely hot and dry climate and low precipitation (3-5 inches). Cactus is an example of plants that can live in hot deserts by storing water in leaves, roots, and stems. Its small leaves and waxy cuticles also help to reduce evaporation. Other flora and fauna of this biome are:

Alpine shrubland and grassland normally locate at higher altitudes (above 3000 meters). It receives very low precipitation (about 280 mm-300 mm) and temperature (about -10 to 40 degrees Celsius). Most of the plants and animals cannot live in this biome because of extreme cold.

In alpine shrubland and grassland, only about 200 species of plants are found. Small ground cover plants, dwarf trees, and small-leafed shrubs are major vegetation. In winter some animals migrate to warmer areas because of food and water scarcity. Other warm-blooded animals can survive easily.

The aquatic biome covers about 70% of the earth’s surface and it is one of the biggest and major biomes of the world. It is classified into major two types:

Freshwater is a type of aquatic biome that contains small water bodies i.e. lakes, streams, wetlands, etc. The water having less concentration (1%) of the salt is freshwater. It is a habitat for millions of phytoplankton and zooplankton.

Large numbers of aquatic animals i.e. octopus, hippopotamus, frogs, turtles, and crocodiles live in this biome. It also shelters about 40 % of the fish species. People use freshwater for drinking, crop irrigation, and other industrial purposes. There are three major types of freshwater:

a. Lentic (Lakes and ponds)

Lakes and ponds do not move or flow as rivers and streams do. So they are also known as still water. Rooted and floating-leaved plants are the major vegetation of this biome. Similarly, invertebrate animals like crabs, worms, and shrimps live here.

b. Lotic (rivers and streams)

River and streams are continuous moving bodies of water. From a point of origin i.e. source, they begin to flow. Some famous rivers of the world are the Nile River of Africa and the Mississippi river of North America.

The area of standing water is wetlands which shelter so many aquatic plants and organisms. The soil of this biome used to be saturated with water permanently. The wetland plants like Cattails, Bur marigold, Common water hyacinth, Texas spider lily, Sedges, etc. rooted on the hydric soil but their aerial parts grow above the water’s surface.

The marine biome is another type of aquatic biome that contains more salt than freshwater. However, it shelters large numbers of aquatic creatures: fish, invertebrates, microorganisms, sea stars, and sea urchins. Ocean, estuaries, and coral reefs are an example of this biome. Marine algae produce a huge amount of oxygen through photosynthesis and also help on carbon sink.

We hope this article helped you to know about the major biomes of the world. 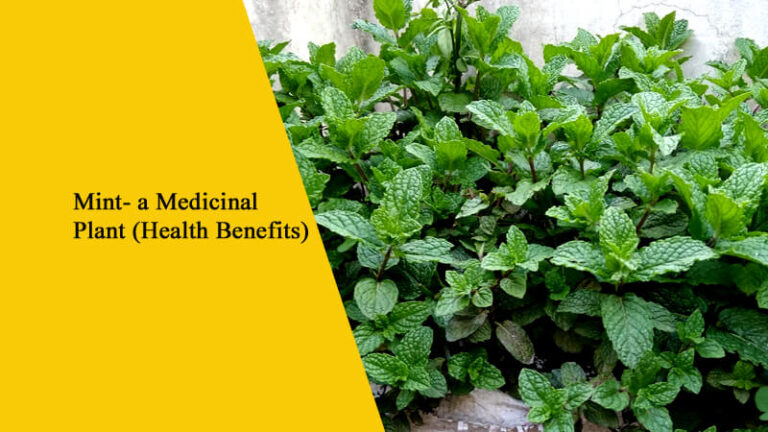 Family: Lamiaceae  Scientific name: Mentha Introduction: Mint is a fast-growing plant and can found in many environments including moist soil. Mints grow better in fertile… 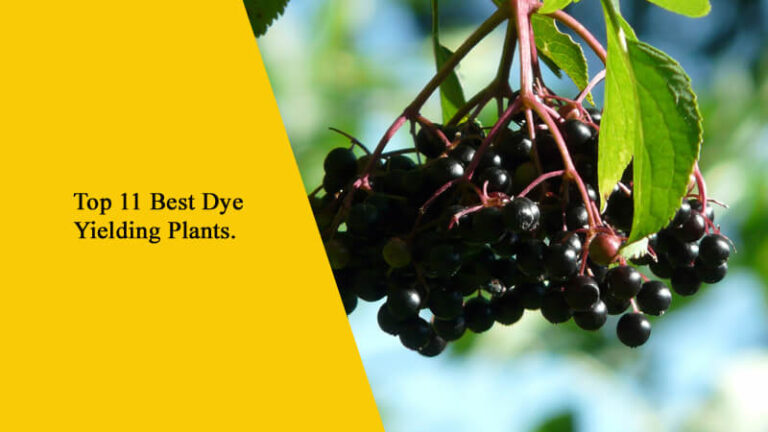 Want to know the best dye yielding plants? The dye is a water-soluble substance and it is used to color textiles, fibers, leather, and other… 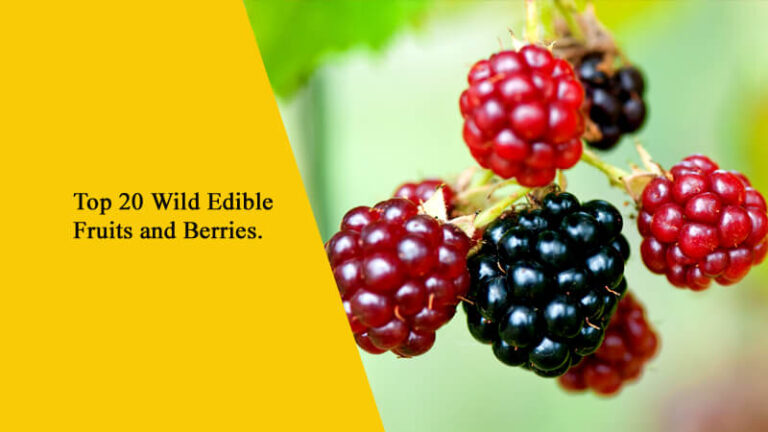 Want to know the top 20 wild edible fruits? Most of the wild plant (herb, shrub, and tree) offers fruits in varieties of shape, color,… 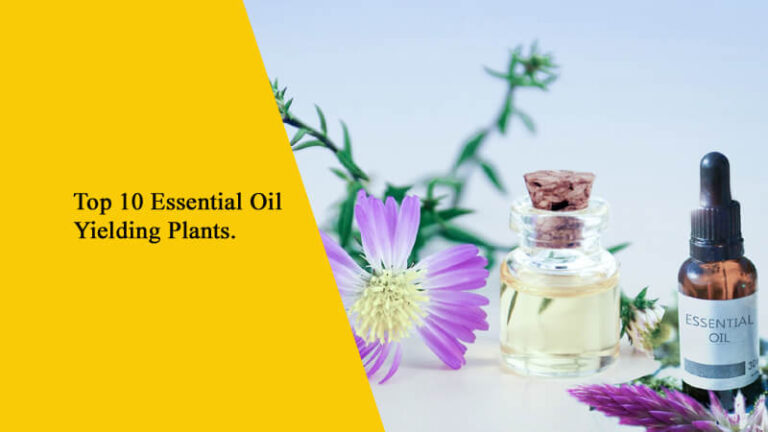 Want to know the top 10 essential oil yielding plants? If so, then you’ve come to the right page. Essential oil is a liquid having… 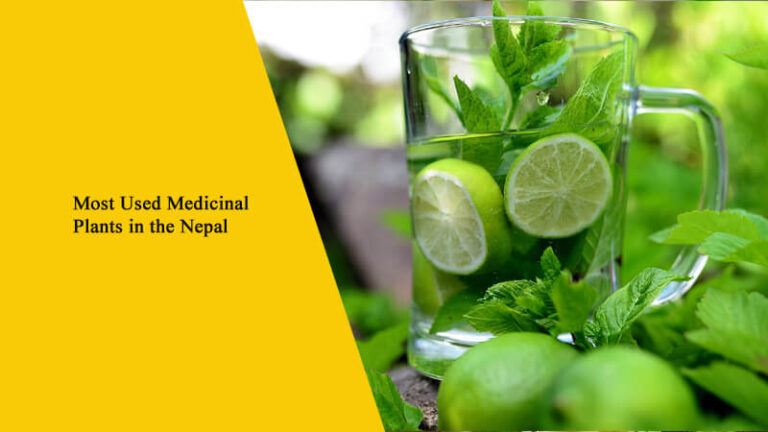 Do you want to know about the important medicinal plants of Nepal? Then, you are in right place. In this article, we will share with… 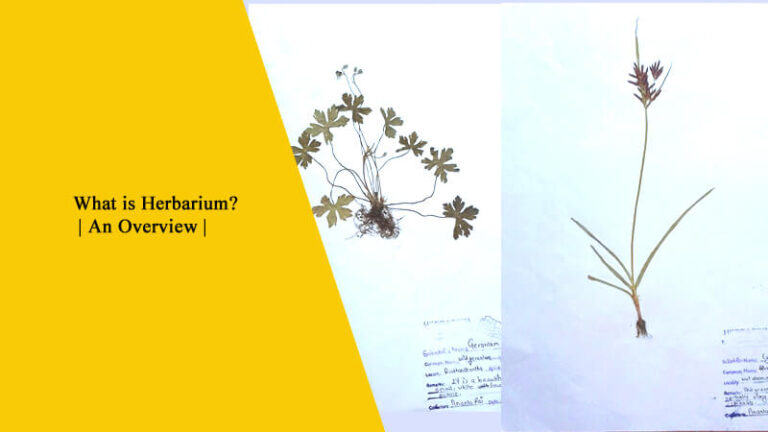