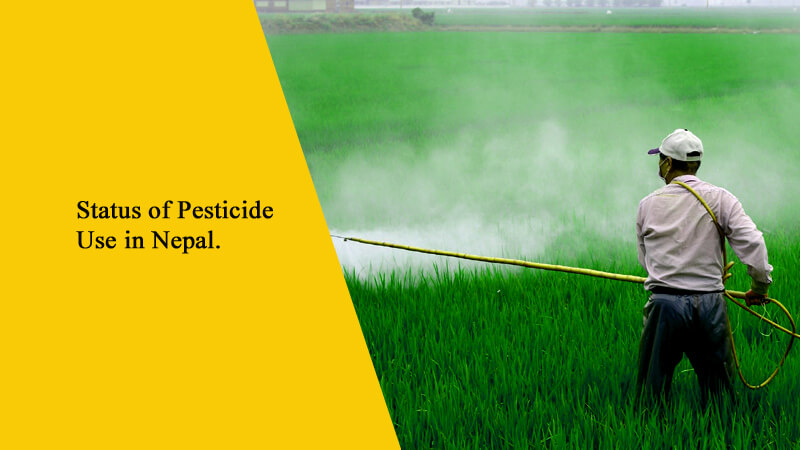 Do you want to know about the status of pesticide use in Nepal?

Then you are in right place. In this article, we will share with you overall information about the status of pesticide use in Nepal.

The pesticide is a much familiar term in agriculture. They are the chemical substances and also biological agents. These substances are useful to inhibit or control the destructive activities of pests including weeds.

Depending upon the variety of pests, insects, and disease-causing microorganisms that it controls, pesticides are of different types. They are herbicide, fungicide, bactericide, rodenticide, nematicide, and avicide, etc. Among these pesticides, farmers use fungicides the most.

In the market, different types of pesticides and insecticides are easily available. They offer several names and brands. At the same time, pesticides are also available in various physical forms such as volatile liquids, semi-liquids, and crystalline solids.

Biological control method is less applicable in agriculture because of its slower and less effective nature. So, farmers are using synthetic pesticides rather than bio-pesticides.

Farming is the main profession in Nepal. Every year, about 15-20% of food products are being lost because of pests. So, farmers are using pesticides in excess amounts.

In Nepal, most of the pesticides are imports from India and China. According to the researchers, the use of pesticides is increasing with the development of hybrid crop varieties.

Synthetic pesticides are found to be developed in the 20th century. DDT, a potential pesticide was discovered by Paul Herman Muller in 1939. For this work, he got the Nobel Prize.

In the 1950s, DDT was introduced in Nepal. People used DDT as the first pesticides for the malaria eradication program. From that age, pesticides are being used for safeguarding public health and to increase agricultural productivity.

Major types of pesticides are:

Bactericide: Bactericide is a type of the pesticide. So, farmer use it to protect plants from infection of bacteria. Cankers wilt, foliar, and spots are some symptoms of bacterial disease.

Herbicide: Herbicide is a type of pesticide which helps to control weeds. So, Its another name is weed killers. Eg: All-24, Cut off 58, Kaal- 58, Multiweed, Twister, Wee kil-58, and Weeder, etc.

Molluscicide: It is also a type of pesticide and people use it to kill mollusks like snails and slugs. Eg: Kingfoe, and Metaldehyde.

Nematicide: It is a chemical pesticide that is useful against plant-parasitic nematodes. Eg: Nemazone.

There are large numbers of harmful pesticides that can contaminate our environment, food, and water. They can also cause critical health problems like skin irritation, throat infection, headache, nausea, eye irritation, and vomiting. So, to reduce their hazardous effect, the use of 24 harmful pesticides has been strictly banned in Nepal.

We hope this article helped you to know about the states of pesticide use in Nepal.